No telnet server in Windows 10 tech preview
When I went to enable a telnet server in Windows 10 preview by going to "Turn Windows features on or off," I noticed that there is no option for Telnet Server like there is in Windows 8.1. Running tlntadmn on the command line produces nothing, as does searching for it in on my drive. Is Telnet Server just not available for th
October 16th, 2014 11:38am
You're right.  The Telnet Server feature is not there.  It may be something that is now moved only to Server.  We'll have to wait and see if it makes a comeback in later releases (or if an update will reenable the feature).
Free Windows Admin Tool Kit Click here and download it now
October 16th, 2014 11:56am

I run dism command to get the all available features in Windows 10 Technical Preview enterprise, there is no telnet server feature listed:

Also, I check this also in Server Preview, it seems this feature is removed from both client and server. 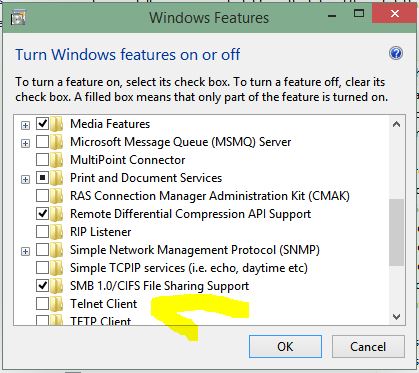 Strangely its in the regular 8.1 pro upgrade ... I just installed/uninstalled it no problem.

Telnet Server is no longer included in Windows 10 Client or Server as this was previously deprecated as outlined in Features Removed or Deprecated in Windows Server 2012 R2. Per the article, the recommendation is to use Remote Desktop instead.

October 21st, 2014 9:13pm
It is disappointing that the recommended replacement for Telnet is remote desktop. It serves to confirm the meme among the Unix community that Windows admins aren't sophisticated enough to use a console for remote administration. Isn't Powershell remoting a better alternative than using remote desktop?
Free Windows Admin Tool Kit Click here and download it now
October 26th, 2014 10:17pm
The article definitively could use some more details with other supported workarounds. As you indicated, you can use PowerShell to manage computers as well as System Center Configuration Manager (previously known as SMS), Remote Server Administration Tools, Server Manager, WinRM or other management tools. Telnet protocol itself is very old (one of the original internet standards) and has several security vulnerabilities which makes it not ideal for companies to deploy due to secur
October 27th, 2014 1:37pm

Telnet is very old true, but it is very powerful because you get an interactive command on the system itself. As for security vulnerabilities, no more or less than anything else. On top of that, when you use NTLM authentication to logon via telnet to a Windows system that is running telnet server, traffic is encrypted-so the old risk of 'but your username/password is in the clear' is no longer a reason not to use it. On top of that, if you use IPSec even using non NTLM all traffic is encrypted. So I don't see any security risk that isn't already there with RDP or even psexec. Psexec is wonderful but has some drawbacks especially when it comes to command redirecting and piping.

I just want to mention that by removing Telnet server Microsoft has just broken, from our organization alone, close to a thousand automated tests for verifying our drivers work with the OS.  I am sure this is being repeated at hundreds of businesses around the world.  Additionally, there are thousands of system administrators who have automated scripts using Telnet for managing their PCs.

Offering Remote Desktop as an alternative is beyond ridiculous.  At the very least, Microsoft should offer SSH as an alternative.  While this requires a lot of rework, at least it is an option.  Personally, I am tired of having to find, download, and install 3rd party software in order to do my job.

Free Windows Admin Tool Kit Click here and download it now
April 4th, 2015 11:13pm
>yes windows 10 has a option for telnet in programs and features if you open up control panel go to add and remove click on turn feature on or off scroll down it will say TELNET check the box next telnet   Only telnet client, not telnet server, at least in my Windows 10 10049 install...
April 4th, 2015 11:54pm