Could anyone explain why SCCM 2012 driver packages have the option to be configured for multicast if Jason's statement is correct that only OS images are multicasted during OSD, and not drivers? 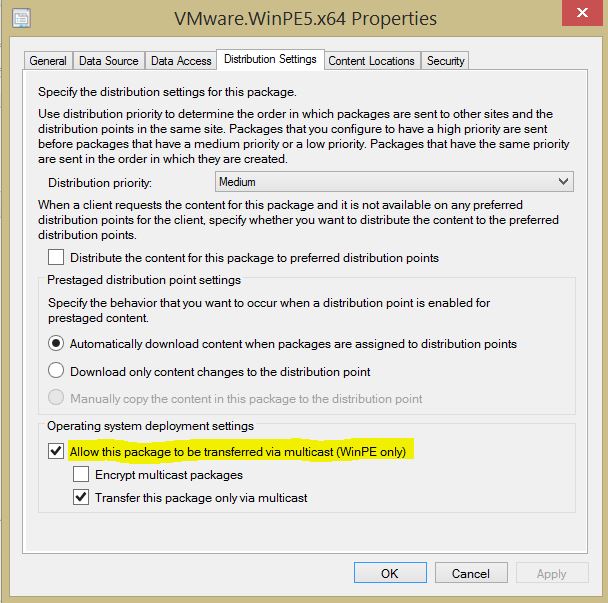 When I check the SCCM 2012 packages properties also have this option.

Note:These settings apply only during the WinPE phase of a run command line task sequence step.

You could verify this by checking the SMSTS.log and mcsisapi.log.

During OSD, you are sill in WinPE when drivers are applied. Packages on the other hand are applied after a reboot when you are in normal windows. This is would make me believe that drivers should be able to be multicasted.  Garth, can you or anyone explain your position when you are saying that is not possible to multicast drivers during OSD.

Hopefully this is a better picture...

OK, so I just verified with the OSD PM and I'm wrong. All content available in WinPE can be multicasted.

Now, why it's failing, I can't tell you because multicasting drivers and other content usually doesn't make sense so I've (obviously) never tried.

Have you reviewed the multicast logs on the server side: http://technet.microsoft.com/en-us/library/hh427342.aspx#BKMK_OSDLog ? Or the download logs on the client side?

Here is what I am seeing in the MCSIsapi.log. I get the first two lines then the following four lines keep repeating throughout the rest of the log. I have been unable to determine what all this is  telling me. The package: PS1002CA is the driver package I am trying to multicast. The package is on the multicast enabled  DP's, and I have already updated the Distribution Points just to be safe.

"Failed to find the package"

Are you sure the referenced package (assuming driver package) is on the DP (not just assigned but successful deployed)? Also is the package version 2 or above?

Not sure why you're trying to multicast drivers in the first place though.

I now have drivers multicasting when my Task Sequence is set to "Apply Device Drivers". Has anyone be able to multicast drivers using the "Apply Driver Package" item in their Task Sequence? I still have not been able to get this scenario to work.